20 Days of New York Summer: August 2012
A summer day in San Francisco often entails suiting up with a scarf and sweater before weathering the elements, curling up with a cup of hot chocolate, ending with a day at the beach where you will get whooping cough and sand in your Doritos. You can spot a tourist because they're the only people not wearing a cardigan and leg-warmers. On the rare sunny day - and even rarer, warm and sunny day - you'll see San Franciscans emerge in droves with a barely contained elation. Finally, an actual reason to wear those ironic 80s aviators! In short: I wanted out. As much as I love this city by the bay, I find myself longing for the sweltering heat of the semi/tropics at least once a year. I love-hate-love stepping outside the cool cocoon of an apartment to be greeted by intense humidity. I love-hate-love the filthy exhaustion at the end of the day. I love-hate-love the communal sweating ritual. I spent most of Summer 2011 in Bangkok and Beijing, and deciduous forest be damned, I needed some (consistent) sunshine. So, I headed to New York...

----------------------------------------------------------------
Day 15: Back to Smith Street
I couldn't get enough! Smith Street has some of the best food in New York. Period. There I said it. My curiosity led me to an incredible local table spot called Seersucker, where they have the best biscuit box and home-made jams (cherry with mustard seed jam, chili jam and salted maple butter) and the sparkling water is as complimentary as the still (classy points!). I popped into Smith Canteen for the best coffee in Brooklyn (and artisanal ring dings, made in house) and then into a candy shop right off the main drag.
------------------------------------------------------------------------------
Day 14: 3rd Annual Ice Cream Sunday at New Amsterdam Market
I cannot resist the allure of a frozen dairy product. In reading an article in New York Mag (or maybe Glamour?) on the popsicle and ice cream renaissance afoot in the city, there was mention of an alluring mistress of Mexican-inspired flavors, La New Yorkina. I visited her website and found that she doesn't have a shop nor does she sell any one place consistently. I was disappointed. I read further. However, she would be at an event happening that very weekend called Ice Cream Sunday that happens only once a year in the summer at the New Amsterdam Market off South Street. A $30 ticket would buy you 10 mini-cone-fulls of premier New York, small-batch ice creams and sorbets + entry into the event one hour before the less dairy-enthusiastic among us. I showed up about an hour early to check out the other local epicureans and got some incredible blueberry and peach monkey bread from a Brooklyn bakery that had recently done a wedding that featured a profiterole tree (when one profiterole was taken from the tree it was replaced by a candle! aww!) in lieu of a traditional wedding cake. I got some Pennsylvania cheese, jams, pickles. This little artisan hot spot is worth the visit and the view of the Brooklyn Bridge is amazing. At noon the tickets were dispensed and so began my strategic flavor quest (they were all absolutely delicious, but favorites are highlighted):

11:30am: Brunch date with Zoe at Cafe Madeleine! Nerd talk about the state of the fat movement, an iced latte, chive biscuit with eggs and bacon + financiers ensue. I pick up a rose on the way home to show I'm a good wifey.
1:15pm: Heroically ride bus (using only the power of the Googles) to save on sweat time (will need that for later).

4:30pm: Mandatory stop at F21, Ricky's & my personal favorite, Dean & Deluca on Prince Street, for current constant craving: smoked salmon and cream cheese on bagel (preferred with capers, but the dill worked out). Every time I get the chance to enter the hallowed halls of D&D I get the chocolate babka. Every. Time.
6pm: Having been informed that the Forever 21 Plus Size line is only housed at the store near Times Square we decide to make a quick stop. Cue Laverne & Shirley theme song... doin' it our way!
7pm: the hunt for dinner begins at a Greek place with no seating. 2 fat girls in Manhattan eating sans seating? Methinks no.

7:30pm: the hunt for dinner continues.

8pm: the hunt for dinner leads us to D'Agostino for brie, olives, beets and some foccaccia. No chilled bubbly water to be found! 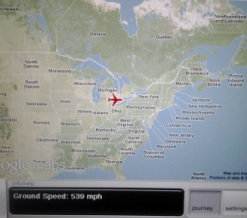 3am: Between flirting with the gay flight steward and waking myself up with my own snorings, I obsessively watched that digital image of my plane as it closed in on NY. It happened to be Virgin America's 5th Anniversary and so we all got box wine at midnight!

7am: arrival at JFK. I decide that the budgeting girl must opt for subway despite all desires to the contrary. Good thing I'm packing light!

9am: arrive Fort Hamilton Parkway into the arms of bestie / biz partner, Julia. Escorted home and she offers to take my cheetah print companion up the 5 flights since the elevator is (temporarily)  broken.
12pm: spend way too much time choosing snacks (and 100% cocoa butter) because of 5% off of purchases over $50 incentive.

6pm: shower, apply on-trend dark lipstick I found while cleaning my apartment before the flight. Julia is in the mood for something "fresh" and "light" and we both agree that we desire cilantro! make copious dinner plans, get lost in Brooklyn, end up in Park Slope eating lobster mac&cheese (sans cilantro) at Chip Shop.

10pm: finish up English Trifle with sprinkles and port instead of sherry. 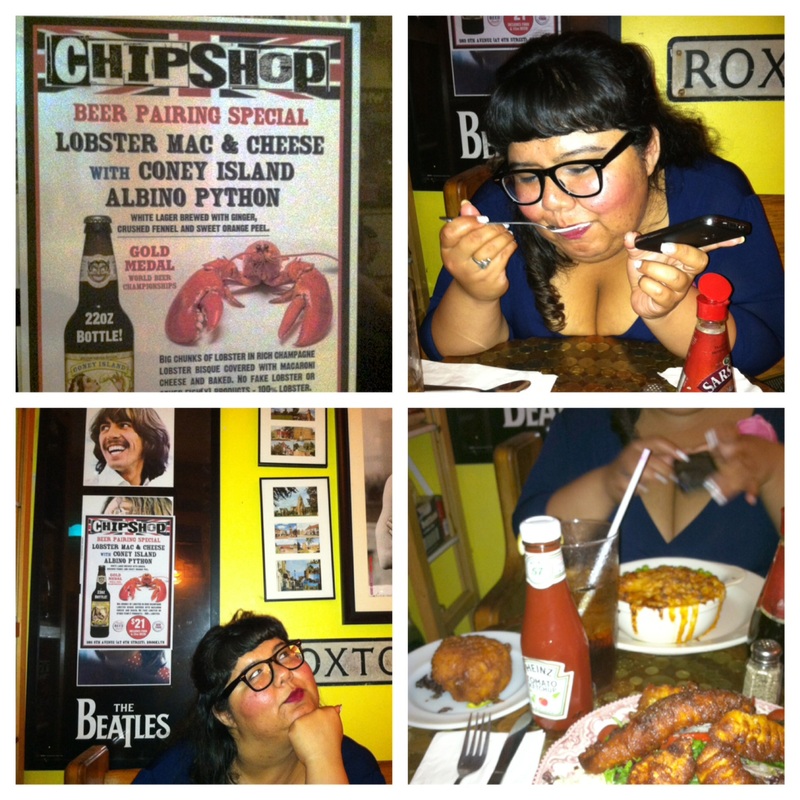